Baseball pitchers have an increased susceptibility to shoulder injury because of increased overloading of the tissues that stabilize the shoulder. Past research has shown that pitchers’ shoulders commonly exhibit greater than normal external rotation (ER) range of motion (ROM) with accompanying loss of internal rotation (IR) ROM. This change in the arc of ROM at the shoulder may lead to injury; however, it may just be an adaptation to throwing in an attempt to maintain the normal total arc of motion (ER plus IR). Whether such changes are a result of bony changes or soft-tissue adaptations is unclear from the literature.

Lintner et al from the Methodist Center of Sports Medicine, Texas, studied whether a shoulder IT stretching program would improve or restore this ROM. The researchers felt that if stretching caused a change, then soft-tissue adaptions could be rectified; such change would also indicate that bony or humeral retroversion changes were not the source of the ROM loss.

The cross-sectional study design involved 85 male professional pitchers. Players were divided into 2 groups. Group 1 included 44 players who had been involved in the Houston Astros’ stretching program, which was designed to increase IR ROM to that of the pitcher’s nonthrowing arm, for ≥3 years. Specific passive exercises included cross-body posterior capsular stretches and IR stretches with the arm in 90° abduction. All internal ROM measures were performed using a standard goniometer with the subjects placed in the supine position; the shoulder abducted to 90° and the elbow flexed to 90°. ER ROM was also recorded, and the total ROM was the sum of these 2 measures. 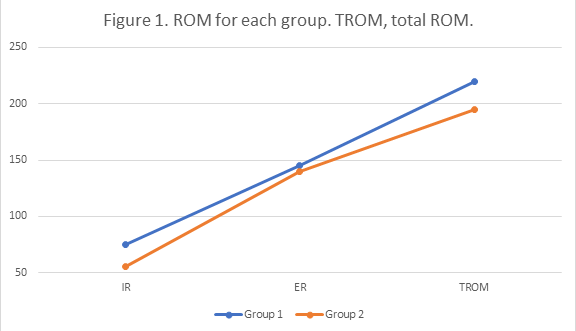 In their analysis of the results, the researchers concluded that since the total arc of ROM was greater in every subjects’ throwing (dominant) shoulder than in the nondominant shoulder, the gain was mostly due to an increase in ER range without a loss of IR ROM. Therefore, the loss of IR ROM when present is attributable to soft-tissue contracture. This finding adds credence to the inclusion of an IR stretching program to maintain IR ROM while minimizing the injury risk associated with a loss of IR ROM.