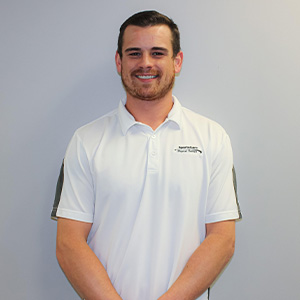 Kevin was born in Portland, Oregon, and attended Barlow High School. He enrolled at Oregon State University where he later completed his bachelor’s degree in Exercise and Sports Sciences. Kevin continued his education at Touro University in Nevada, earning a Doctorate in Physical Therapy in 2016. Kevin specializes in return to sport exercises, snowboard and ski injuries, foot and ankle injuries, aqua and pool therapy, and continues to build on his strong knowledge of manual based therapy. Kevin is a third-generation physical therapist. His grandfather, Clem Eischen, started SportsCare in 1963 and his father George Eischen is the director of the Gresham SportsCare clinic. When away from the office, Kevin enjoys snowboarding, wakeboarding, off-roading in his Jeep, camping, motorcycles and working on cars. He recently bought and is remodeling his first home. Fun fact: Kevin adopted two brother kittens.