Get to Know Your Physical Therapists

In Clinic News, Physical Therapy by George Eischen PT, Director at Gresham SportsCare on May 21, 2019, 111 views

George is a native Oregonian who attended Reynolds High School and earned his Bachelor of Science degree from Oregon State University. He graduated from the University of Indianapolis in 1985 with a Masters Degree in Physical Therapy. George has worked for Gresham SportsCare since 1985 and took over for his father, Clem, in 1995. He has volunteered with the Atlanta Falcons and assisted during combines with the Seattle Seahawks, San Francisco 49ers and Denver Broncos. He enjoys working with local athletes at all levels. George is a proud father of two children, Kevin and Katherine. He enjoys playing basketball, hiking, wakeboarding, snowboarding, circuit training and traveling.

Joe is a North Dakota native who graduated from the University of North Dakota in 1987. He remains active in competitive cycling, designs training programs for athletes, competes in a variety of sports and fitness activities, and enjoys skiing and strength training. Joe has completed a variety of courses in Manual Therapy techniques and has a good deal of experience treating spinal and orthopedic conditions. Joe began working for Clem Eischen in 1987, and after five years, worked with Providence Hospital and served as the Director of their Gateway Satellite Clinic. He earned the Mission Medal while at Providence. In 1999, he partnered with George Eischen and opened NE Portland SportsCare, treating general orthopedics and spine patients, while also assisting treatment of local high school and college athletes.

Ethan is the Director of Clackamas SportsCare. A native of California, he moved to the Northwest after receiving his Doctorate degree in Physical Therapy from Loma Linda University. He has had extensive training in manual therapy and rehabilitating the injured worker. He treats a variety of orthopedic conditions including sports injuries, whiplash and specializes in spinal dysfunctions. In his spare time, Ethan enjoys spending time with his family.

Joe was born in Portland, OR and grew up in the Oak Hills neighborhood, right down the road from Beaverton SportsCare Physical Therapy. After graduating from Westview High School, Joe attended Oregon State University where he graduated at the top of his class with a Bachelor of Science in Exercise and Sports Science. He then earned his Doctor of Physical Therapy degree from Eastern Washington University and was awarded the Faculty Merit Award for academics, leadership and professionalism. Joe is certified in Modern Strength Training and is an expert in Blood Flow Restriction Therapy and Training. He has also completed postdoctoral training in a wide range of orthopedics, spinal manipulation therapy, work injury prevention and rehab, therapeutic pain neuroscience education, auto accident injury care and more. In his free time, Joe enjoys keeping up on research and continuing education, spending time outdoors with his wife and his golden retriever, traveling, weight training, mountain biking, backpacking, snowboarding and trying new sports and activities. Joe’s approach to care is evidence-based, individualized, holistic and, just as importantly, fun!

Ryan, the founder of Armworks Hand Therapy, has enjoyed living and working as an occupational therapist in the Portland area since 1997, following graduation from the University of Puget Sound. Since 2000 he has specialized in hand therapy, working with a variety of injuries of the elbow, wrist and hand. Ryan is a Certified Hand Therapist – an advanced certification in hand therapy which reflects a high skill level and knowledge base. Ryan enjoys golfing, water skiing, working in the yard and spending time with his wife Jenne and four sons. 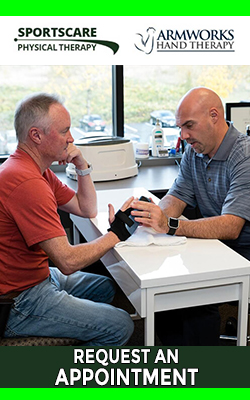