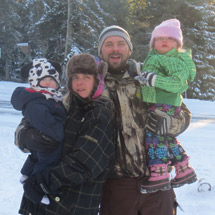 Domonique was born and raised in Portland, Oregon. She attended high school at Grant, and continued her education at Mount Hood Community College where she earned a degree in Medical Billing. She has been in the Medical Billing and Contracting field for over 13 years now, working with SportsCare and Armworks since 2011. In the summers, Domonique enjoys camping, quading and boating with her family and beach trips with her husband on their Harley. During the winter months, Domonique and the family spend as much time as possible on Mt. Hood playing in the snow.