Chop Your Way to a Solid Core

In Exercises, Health and Wellness by Joe Givens, MS, ATC on October 1, 2016 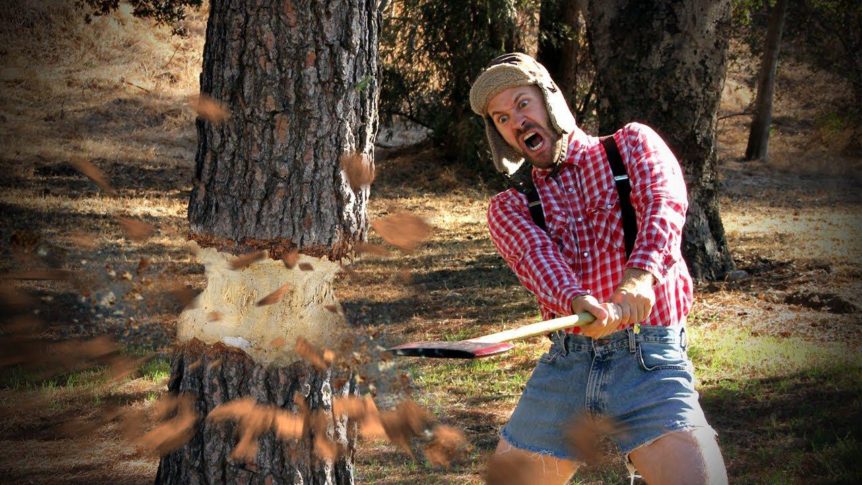 A professional lumberjack explains how to chop wood and carve out a six-pack.
Splitting firewood might be one of the manliest pastimes anyone can ever have. You, alone, outdoors, splitting logs with one smooth swing of your ax; if that doesn’t grow the stubborn part of your beard, nothing will. Alas, with the invention of the Duraflame log and gas fireplaces, this manly art form seems to have been lost to the ages…until now.

Reach into your closet and dust the cobwebs off your flannel because we have recruited Professional Lumberjack Dave Jewett who has 30 world titles to his name, to teach you how to split wood and get a killer workout.

Wood-Splitting Benefits
Because you are swinging an ax, many think that splitting wood is a great arm workout, which is not the case. Burning between 400 and 500 calories an hour, splitting wood is much more of a cardio and core workout than anything else.

Jewett explains that if you bring the ax down the center line of your body, then back up the center line when you reload, it activates the same muscles that a crunch would. “I have a pretty darn good six pack and I’m 42 years old,” says Jewett. “A lot of that is from splitting wood.” As far as your arms are concerned, picking up and moving the wood will give them their own killer workout.

Choose Your Weapon
When it comes to splitting wood, finding the right ax for the job is half the battle. This is no easy task as there are dozens of types out there on the market. “When people see me splitting wood, they think the blade must be really sharp and really thin, which isn’t the case,” says Jewett. In contrast, a thicker blade that weighs in at two-and-a-half pounds and is 30 inches long is the best option for splitting.

He warns against buying an axe from the hardware store that has long or round handles. “A lot of hardware stores sell axes with these big, long there foot handles, which is a joke,” says Jewett. “The longer the ax, the less power you have and it’s also much less accurate. You don’t see golfers with five foot clubs, so don’t get a long ax.”

Protect Yourself
Aside from an ax, you’ll also need protective gear such as safety glasses, gloves and heavy boots. Gloves aren’t just recommended for handling wood in the winter, but for the summer as well to protect from cuts. “I wear gloves and I’m a professional lumberjack. You don’t want to cut short your work or workout because of splinters,” says Jewett. “Don’t wear thick gloves that get sweaty, you want to have a good grip on the handle. Also don’t use rubbery gloves because you need your hands to slide.”

Start Chopping
According to Jewett, one of the biggest mistakes beginners make is placing the wood on the ground before splitting. You’ll want to find a way to get the log about a foot-and-a-half off the ground into what he refers to as your power zone. “I usually use a large dumby log and place the wood I’m cutting on that,” says Jewett. “When you start, you want to lift the ax until it is slightly above your head and in the center of your body.”

Next hold the ax with one hand at the bottom and one hand high up by the blade. When you lower the ax to the wood, let your top hand slide down towards your bottom hand. “For the best accuracy and power you want to bring the blade down between your eyes, down your nose and straight down your body,” says Jewett.

He points out that splitting wood with an ax is very similar to the way a golfer drives the ball or a hockey player takes a shot. “You are throwing the ax up and pulling down then snapping your wrist like a golf swing at the bottom,” says Jewett. “Your eyes never leave the point of impact. Just like in hockey it isn’t a big, wild swing but a good snap.”