What are the common wrist injuries? 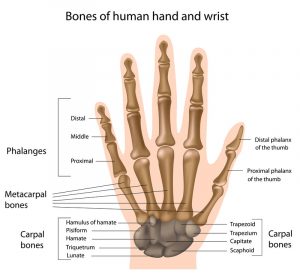 The most common injuries to the bones of the wrist happen when someone tries to catch themselves when they trip and fall.  When your body weight lands on your outstretched hands your wrist bones have to take up all of that support and they can break.  The most common bones of the wrist to break, the end of the radius bone and the scaphoid, are both on the thumb side of the wrist.  These fractures are kept still in a custom orthosis that can be made by the hand therapy team at Armworks or they can also be casted by an orthopedic doctor.

There is a network of ligaments in the wrist that work together to stabilize and hold the 15 wrist bones in place.  The two most common sprains of the ligaments happen on the outside of the wrist below the little finger (called the TFCC) and the other is on the back of the wrist between the index and middle fingers (scapholunate ligament).  Common causes of these injuries are quick twisting or pressing of your wrist backwards that puts a lot of strain on the ligament.  The best thing for these injuries is to get a custom orthosis that Armworks can make on the wrist injuries quickly after being hurt so the ligament has a chance to calm down and begin repairing itself. 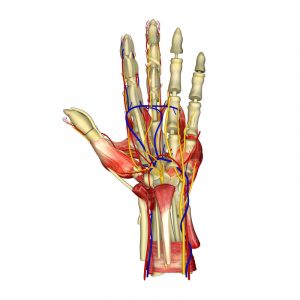 There are 24 tendons of the wrist that are either helping the wrist to move or they are travelling through the wrist onwards to the fingers/thumb.  The tendons at the wrist are held in place by a series of tunnels (or compartments) that hold them in place when the wrist moves.  When the tendons have to move through these tunnels too often or with too much force then something called “tendonitis” can happen.  This situation can get worse by the more times the tendon rubs against the tunnels so rest, splints and a change in activity level of the wrist are all helpful things to do early on for these injuries.

There are 3 main nerves that travel through the wrist on their way to their final destination at the end of the finger tips.  The most common nerve injury of the wrist is carpal tunnel syndrome.  This injury involves one of the wrist nerves, the median nerve, as it travels through a round shaped tunnel that has 4 wrist (or carpal) bones as it’s floor and a ligament that forms the ceiling.  All of the finger tendons (8 total) and 1 thumb tendon along with the nerve are all found in this tunnel.  When the tendons of the fingers are used too much or too forcefully then they get bigger and push the nerve up against the nerve.  A splint worn at night is a good start of treatment for carpal tunnel syndrome.