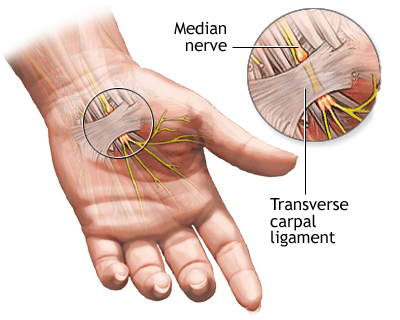 Similar to a clothing or diet fad, “carpal tunnel” was another catchy social trend that everyone seemed to have had, at one point or another. Anyone using a computer at work or at home appeared to have the symptoms, and there was no end in sight. Even though we still encounter carpal tunnel in our practice, it seems to be at a lesser extent these days. Maybe the incidence went down with the demise of the Blackberry.. All jokes aside, the condition still exists, and there are plenty of people who are affected.

Do you have it? Let’s go over the basics.

When people say “I have carpal tunnel,” typically they refer to carpal tunnel syndrome. Everyone has a carpal tunnel. It’s located in the base of the hand and appears as a narrow passage, sort of like an upside down arch that is covered by a strong ligament. This tunnel houses the median nerve and tendons going to the digits. Occasionally the tendons within the carpal tunnel can thicken or become irritated due to swelling and cause increased pressure on the median nerve. As the nerve is compressed within the carpal tunnel, the function of the median nerve becomes impaired resulting in abnormal sensation accompanied by numbness, tingling, pain, weakness, and muscle atrophy in long standing cases. The pain one typically experiences may indicate another condition, but carpal tunnel syndrome is the most common and widely known of the peripheral nerve entrapment conditions where a nerve begins to function abnormally due to a compression or traumatic injury.

Carpal tunnel syndrome can be caused by a variety of conditions including but not limited to diabetes, hypothyroidism, wrist fractures, dislocations of the wrist, rheumatoid arthritis, osteoarthritis, pregnancy, inflammation, fluid retention and in rare instances tumors. The condition is most often seen in female patients over 40 years of age. Commonly patients affected by carpal tunnel syndrome perform activities requiring a strong grasp, vibration from tools of equipment and cold exposure (all 3 have to be represented) as studies have shown that each one of the aggravating factors are not likely to cause CTS on their own. Functional use of the affected hand will typically exacerbate the symptoms, often due to poor posture and body mechanics.

To confirm a diagnosis of CTS, we recommend a visit to an orthopedic or hand specialist. Basic provocative testing will usually provide a quick confirmation of the diagnosis, but conclusive results may require a more extensive testing.

In the early stages your symptoms may be relieved with conservative treatment such as splint at night, activity modification, ergonomics and rest. If conservative treatment has failed, a carpal tunnel release may be indicated. The goal of the surgery is to relieve pressure by cutting the ligament that forms the roof of the carpal tunnel. This in turn creates additional space for the structures within the tunnel and relieves pressure previously exerted on the median nerve. After the surgery is complete you may experience soreness around the incision, stiffness in the wrist and digits and your feeling in the fingertips may not immediately return to normal.

Following surgery, therapy may be indicated, but is not mandatory. Many patients are able to work through these issues independently but we strongly recommend seeing a hand therapy specialist even if it is a one-time visit only to get you set up with a successful home exercise program. Regaining full strength and feeling in the fingers may take a while, so be patient.